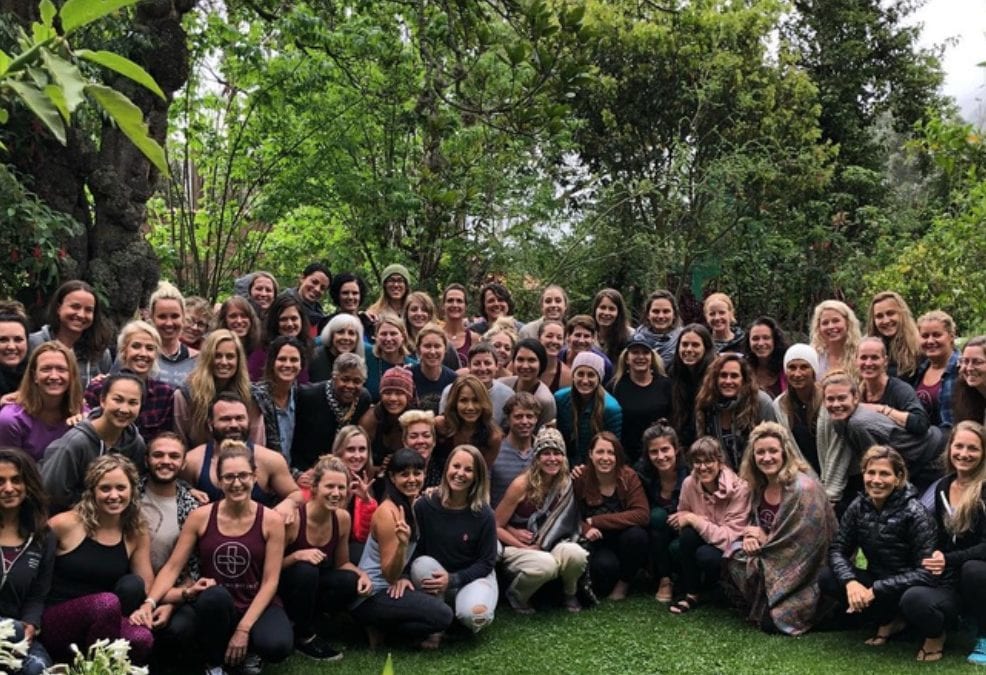 The largest group to come to Willka T’ika  in the last few years was a group of yoga teachers who traveled from around the world to participate in a special yoga training course sponsored by the world-famous teacher, Tiffany Cruikshank. There were 65 teachers-in-training and 5 assistants who helped Tiffany run her weeklong workshop. The schedule was rigorous. Each day contained five hours of lectures and demonstrations, two yoga and meditation classes, and reading assignments. When the teachers weren’t in session, they were either reviewing their notes or updating their Instagram pages, which they used to promote their own yoga studios back home.

With 70 guests, every room at Willka T’ika was occupied. Tristen and I even offered our own house as a personal suite for Tiffany. Her attentive assistant, Jenna, wanted to make sure Tiffany had plenty of privacy and personal space since she would be “on” from 7AM until 8PM all week. Handing over the keys to our home to Tiffany, we moved across the path to our AirBnB next door.

It was exciting to meet yoga teachers from so many countries: Finland, Norway, France, Germany, Mexico, the Philippines, South Africa, New Zealand, Australia, and South Africa. There was even a Peruvian yoga celebrity teacher who blended in quietly with the English speakers. The gender balance was even more skewed than with a typical yoga group, with only 3 men and 67 women.

One interesting trait of the group was the range of “special diets” that had been requested in advance. Our kitchen staff was well accustomed to dietary requests but this group was different. About 40 of the participants had requested a diet that was either gluten-free, dairy-free or vegan with a few variations of each. The morning of the group’s arrival, I sat down with our head chef Florencio to explain the importance of keeping these requests straight.

“There can be no wheat near any of the gluten-free guests,” I explained to him in Spanish, emphasizing the danger of celiac. “Celiac es muy serio!”

With so many special requests, we’d need a way for the staff to easily identify people and make sure to deliver the correct meal. I had devised a name tag system with a color-coded sticker for each type of diet: gluten-free in yellow, vegan in green, and dairy-free in blue. When the group finished their check-in, I proudly passed out the colorful name tags.

Jenna thanked me for the extra effort and then added nonchalantly, “Well, I’m sure there will be some changes. With these groups, there are always some changes.”

I wasn’t sure what she meant until that evening when Florencio pointed to woman with a yellow tag on. “Sr. Terry, no creo que esa señora sea gluten-free.”

I was too quick to respond, “Did you look at her name tag? She could have celiac! We must be very careful not to make any mistakes.”

“Sí, Señor Terry.” He nodded and then pointed out gently that she had been nibbling on bread all throughout dinner. Apparently, Florencio had served her special gluten-free frittatas and she had eaten them with bread!

Trying to make sense of this paradox, I surveyed the guests who were happily enjoying their first Peruvian dinner. Many of them had already removed their name tags and were passing plates back and forth, mixing up the different options. Is this what Jenna meant by “changes?”

The next morning, a “vegan” wearing a green nametag was enjoying a large portion of eggs. I decided to ask her, out of curiosity, if she had the wrong color on her name tag.

“Well, no need to worry,” I encouraged her. “Even though we’re a vegetarian resort, we have plenty of natural proteins like quinoa, tarwi, and kiwicha. Vegans have no problem finding protein in the Andes.”

“Oh,” her voice cracked nervously. “I am going to need eggs, though.”

“Sure, we serve eggs every day at breakfast,” I cleared a couple empty plates from her table.

“But, I need eggs with every meal.” She was literally starting to panic so I put down the plates and reassured her that we could easily provide hard-boiled eggs whenever she wanted.

We both signed in relief. First “special need” case solved. I walked back to the kitchen to warned them to be prepared for a phalanx of egg-eating vegans.

By Day 2, the name tags had completely disappeared and everyone’s diet had gone rogue. The gluten-free folks loved the fresh Andean bread. The dairy-free yogis were eating lúcuma ice cream for dessert. And the vegans continued to hoard hard-boiled eggs and smuggle them into their morning yoga class. I wanted to apologize to Florencio for all the confusion but he just smiled. “Señor Terry, así son los grupos de yoga.” He had seen this behavior with many yoga groups. After 25 years, it was very hard to surprise our kitchen staff.

This group of 70 was the hardest working group of yogis we have ever seen. When they weren’t in a yoga or meditation class or lecture, they were reviewing their notes. Tiffany was known for her academic rigor so every student/teacher had a notebook filled with notes, diagrams, and resources. They even had to squeeze study time into their busy schedules. By the last night, they were ready to let off some steam. Jenna had asked if she could purchase wine for the final dinner, and asked me to set aside 30-40 bottles. I couldn’t imagine that a group of exhausted yoga teachers would consume so much alcohol after a week of yoga, meditation, and organic food.

We hired a local musician to perform a lively concert and a few of the women picked up a couple of his string instruments and started playing along. One woman began to belt out a blues song, much to the surprise and delight of our Peruvian performer. The wine bottles were passed around and by the time the concert was finished, every last bottle had been consumed. Tristen helped Livio collect all the empties while one man was helping a few ladies stick handstands in the middle of the bar. Who said Yogis didn’t know how to party?

The next morning was a prolonged goodbye with everyone hugging, taking selfies, and exchanging contact information. With the exception of Tiffany, who was on her honeymoon, most of the group would be leaving that afternoon without even seeing Machu Picchu. It was almost unheard of to have guests come to Peru and not visit the ancient Incan citadel. But these were serious yogis and they had come for training not tourism. It really was impressive to see such dedication. We would miss this group, special yoga diets and all.